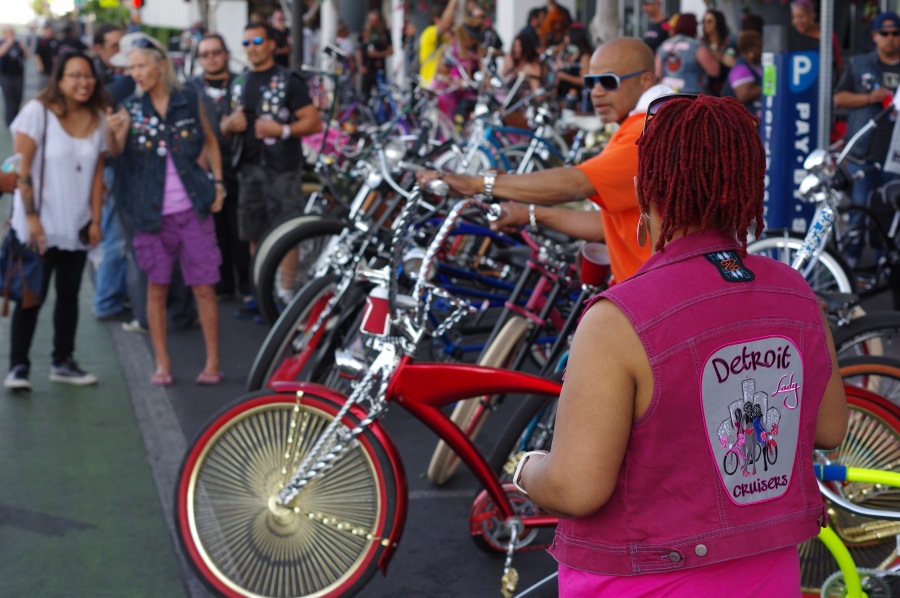 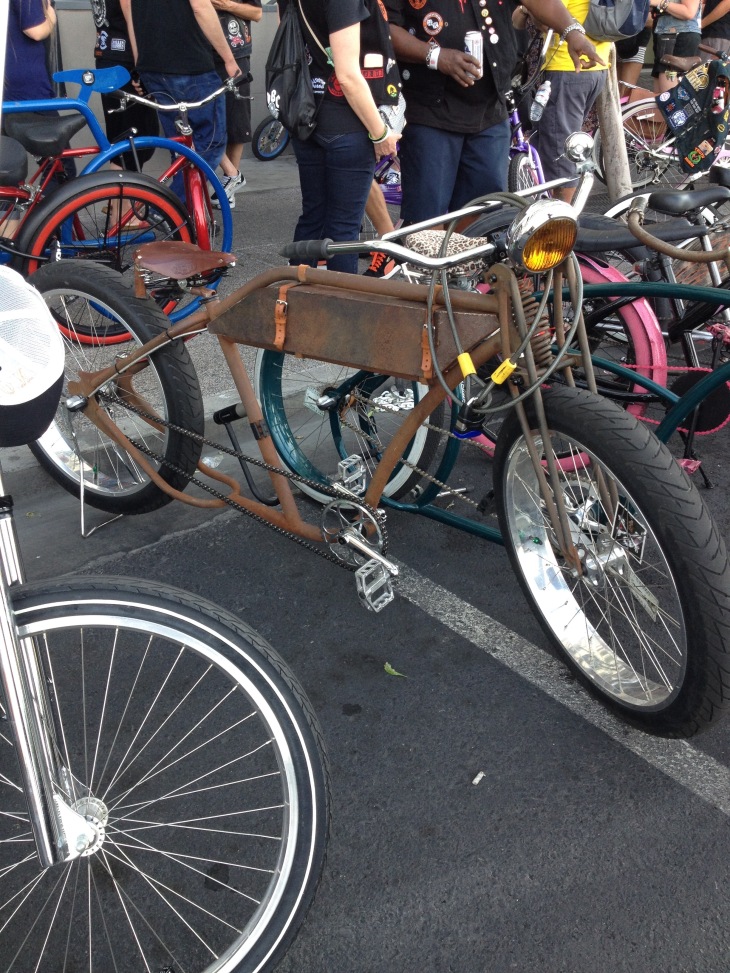 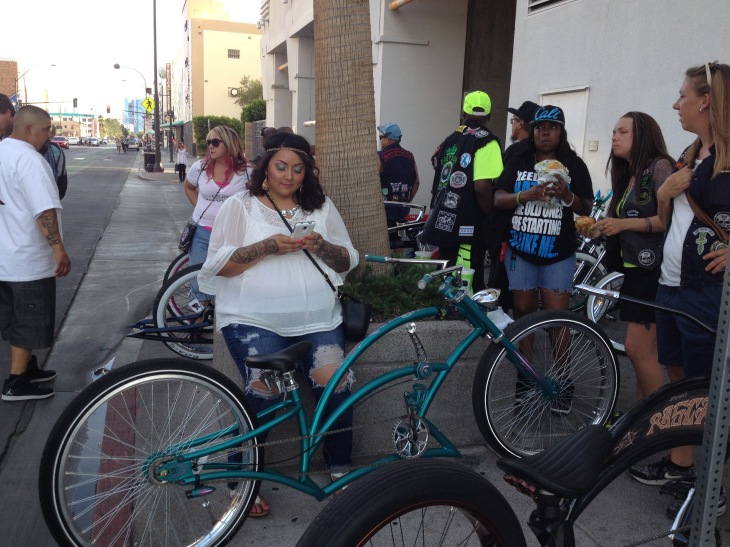 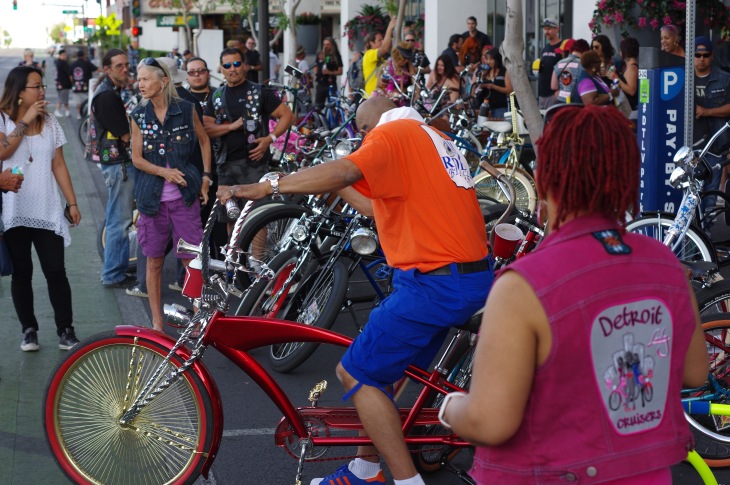 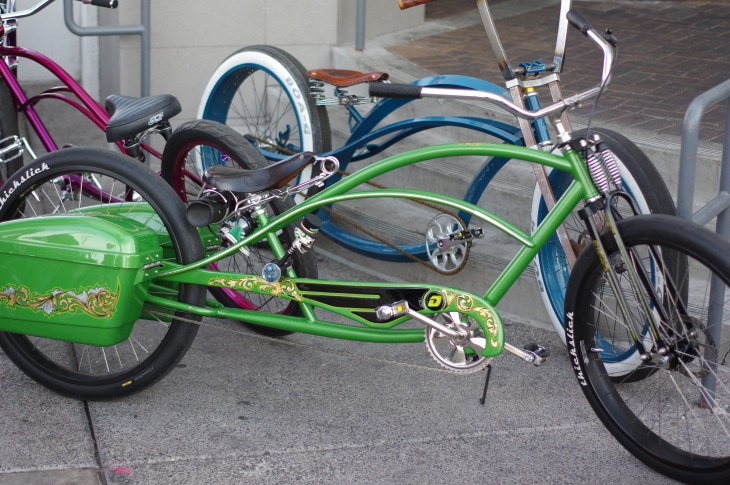 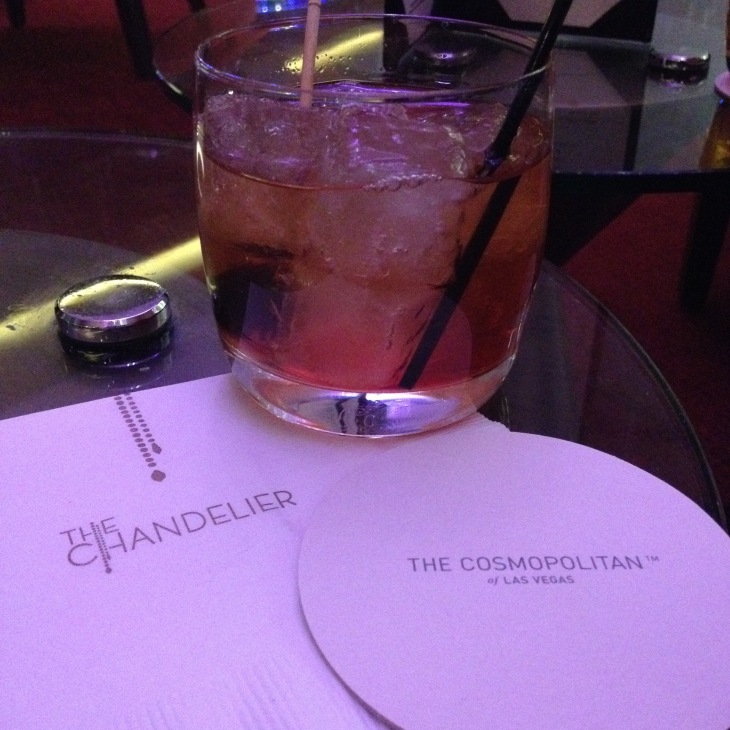 Sue B. Anthony needed an oil change, so Wayne got up early on our first morning in Vegas and took her to the Subaru dealer. I redeemed a free coffee coupon at the Gold Spike, which is next to our hotel. It’s an old casino/hotel that has been reborn as a 24/7 non-gaming lounge. Inside is a restaurant, bar, and “The Living Room” which is a comfy hangout space with sofas and a fireplace. Outside in the space next to the Oasis pool is “The Back Yard” outfitted with string lights, comfy outdoor furniture with gas fireplace tables and oversized lawn games like cornhole, jenga, and chess.

When Wayne returned, we walked down to PublicUs and got brunch. The desk clerk at the Oasis had recommended the place. She said, “It’s on Fremont, but kind of far down. Most people don’t walk down that far.” We found out why. It’s a little past the radius of the trendy spots, but is itself very trendy.

On the walk down, we passed several old roadside motels similar to the Oasis, but these were all defunct. They were fenced off and motionless, just waiting and hoping for either the wrecking ball or a benevolent investor. They had names like Peter Pan and Starlite. One very good thing about downtown is that even if the value of an old building isn’t recognized and it gets demolished, at least the neon sign announcing what used to live in that surface parking lot is spared. And they’re lit at night. The old Ambassador Motel sign has a neon outline of a llama and proclaims “Llamas eat free!”  Tony, the CEO of Zappos, should take them up on that offer.  He has two llamas (actually alpacas, but we all know llama is much funner to say), and they live with him in the Airstream Village trailer park on Fremont Street.

PublicUs has long communal tables, an open-space concept, and all the food is on display for viewing.  Wayne got a frittata and I had their version of Eggs Florentine.  Both were yum.  I looked over halfway through my eggs and Wayne had eaten all of his.  Poof, gone.  The coffee was nothing to sneeze at, either.

We stopped into a bookstore on the way back down Fremont. Highly recommend a stop if you’re ever in the area. The Writer’s Block carries not only a stellar selection of books but some unexpected oddities like a line of Hieronymus Bosch figurines. And there’s a pet rabbit hanging out next to the checkout counter. While we were there I got the phone call from our real estate agent that the sale on our house had indeed just closed. Cha-ching. We bought three books: Mr. Snack and the Lady Water by Brendan Shanahan, The Dinner by Herman Koch, and A Sand County Almanac by Aldo Leopold.

We were staying catty-corner from a building called The Ogden. Out front the parking spots were all reserved for…BIKES. There was a custom bicycle convention in town. Hundreds of people from all over the world had converged on Las Vegas with their customized bicycles.  We had seen a couple of groups riding downtown the night before, lit up with LED lights in all their low-riding glory, but figured they were locals.  As we checked out the rides, we were like kids in a candy shop. There was a bike for every personality. One woman matched her eye makeup to her bike. These bikers had vests with their club name patches sewn on. Capital City Riderz, GMOB (Grown Men on Bikes), Detroit Lady Cruisers.

That evening we decided we wanted to have a the-house-is-sold celebratory cocktail and burger at the Strip. Interwebz indicated Holstein’s Shakes and Buns was the burger place, located in the Cosmopolitan Resort and Casino. Transportation options were the bus, taking one hour with a $6 fare apiece, or car with free parking at the Cosmopolitan, taking about 30 minutes. We opted car.

Pro tip: You don’t have to be a guest at the Cosmopolitan to park there for free. Use the Strip entrance, just past the Bellagio sign. Note the valet parking area as you drive past. That’s real marble, y’all. In a parking garage. Vegas.

Two Old Fashioneds with Maker’s Mark, barkeep! We retired to a banquette with our cocktails and mused about how long we could live in Vegas from our house proceeds. We concluded Not Very Long, judging by the $15 price tags on our drinks.

We lost a little money (Guess what?  Unicorns are NOT lucky.), then walked down the Strip.  And walked.  And walked. We saw the fountains at the Bellagio, a very good Walter White impersonator, practically naked KISS, zero Prince impersonators, a middle-aged Marilyn Monroe in a white dress standing over a street grate (later when we passed she was crouching on the curb enjoying a Marlboro light while being ogled by a homeless guy ten feet down the same curb), caught part of the show at Treasure Island, and walked into the Venetian to see the canal and gondoliers. I high-fived an Elvis impersonator and impulse bought some perfume at Sephora called “Wool” and “Rain” that you can wear separately or together.

We returned to the Cosmopolitan and Holstein’s for our dinner. The burgers were cooked to perfection. Wayne even got a milkshake to go.

On the drive back to the Oasis, we decided we like downtown Las Vegas a lot better than the Strip.  Seeing right through the thin veneer of the Luxurious! Entertaining! spectacle that is the Strip to its ugly underbelly of addiction, mental illness, and homelessness makes me sad.  Monied interests invest heavily in the casino resorts, but there don’t seem to be many options for help for those who need it most.  Plus, battling hordes of other tourists and trudging from one casino to the other isn’t our thing. Even though they each have a different theme, they’re virtually all the same. Perhaps one day soon, thanks in large part to the Downtown Project’s efforts (funded by the aforementioned Tony, the CEO of Zappos), people will recount their Vegas vacations to their friends and neighbors with a flap of the hand and say, “Oh, we always stay downtown when we visit Vegas now. You should see what they’ve done with the place!”

View all posts by paynerushing

One thought on “Las Vegas: You Should See What They’ve Done With the Place”